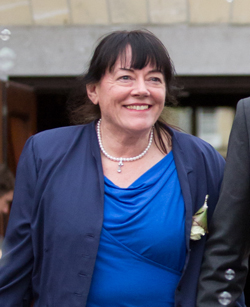 As a child of an evangelical-reformed father and a Catholic mother, I was raised in the Catholic faith and also experienced the religious customs and contents of my father's family. The religious upbringing was not strongly determined by any church, more by the Christian content as such. I went to a Catholic primary school and an urban grammar school, where I had to learn classical languages and history in addition to modern languages and science. Greek mythology made me ask questions about biblical contents and faith itself - because they also seemed to be mythical.

My father - who was seriously ill and in hospital - died suddenly, in my presence, when I was eight years old. This event strongly influenced the rest of my life and led early on to a kind of awareness of the fact that man is a mortal being, that at the end of life there is death for every human being - and that there can always be an unexpected final farewell. "Memento mori!" became a life theme!

The consciousness of mortality and the loss of faith were balanced by the joy of human encounter, friendship and harmony in music. The inner doubt about immortality and the mind was thoroughly healed by a saying I read in a novel: 'Lord, grant me the serenity to accept the things I cannot change; the courage to change the things I can; and the wisdom to know the difference'. Later I learned that these are words of Francis of Assisi. As the most beautiful music, these lines gave me back my confidence.

Nevertheless, medical study was a struggle with death as a phenomenon. The Catholic faith had nothing more to give me. Participating in a study group about Jewish philosophy and the Torah brought again a comforting rule: "And yet I will always be with you...".

Wrestling with medical studies and the medical profession lasted from the age of 18 to 32. Then I read Rudolf Steiner's "Theosophy" - in one night - and the struggle was over, the insight complete. This effect of the book proved its full truth, for in just one night the riddle of mortality was solved - not only in knowing.

In the 33rd year of my life I had the first introduction to the 'Philosophy of Freedom'. A few years later, when I lived with my mother, who was suffering from a terrible illness, in her final years, I meditated on 'Philosophy' as a practice book and compared it with Krishnamurti's philosophy. I didn't just want to read the 'Philosophy of Freedom' - for it was already understood - I really wanted to do this paragraph by paragraph, perform it, examine it in my own soul, test it. What happens when I try to observe the thinking? How do I recall my thoughts? What happens then? What is the sensory perception, what happens when I look at something with the eye, listen to something with the ear, how do I find understanding and so on. The inner effort led to the book being read more and more actively in a stream of thoughts.

When it had rested for a few months, the experience of the transformation of dead thinking into living pure thinking power - which never left me after that, which increasingly expanded into the contemplation of the mind - occurred for the first time in meditation, and is still expanding. From the very beginning, this thinking acted as a reverential experience of the Logos, increasingly filled with Him: "The first form in which Christ appears to the soul of man is that of thought.

This first experience lies almost 30 years back in the past. She's matured...

The transformation of the dead mind into a living force of thought has become more and more a spectacle of the mind. It was given to me to transform the theory of knowledge into a practice of knowledge. The theory is just as logical as the proof of Pythagoras' theorem. When the theory becomes reality, something like the reality of a mathematical proof happens. Each step can also be seen, but is only fully proven by the happening.

First there was a force of thought that could be contrasted in actuality as a pure, empty and moving force. Then the inner spectator awakens, who can not only see the pure force of current thought, but also the thought process filled with content. Thus the known 'never' (page 38 in the 'Philosophy of Freedom') is conquered; the impossibility applies to the mind, not to living thought. From this moment on one really experiences oneself as two separate beings, a thought being and a thinker, respectively as the thought process and the one who thinks.

This newly awakened knowing of the self, the direct seeing and knowing of the thought process in its actuality, I have named the 13th category - a category which is not only applied knowingly but which also creates, through which one only really creates and creates oneself. The self emerges as woven from the same mental substance as its concepts and sensory perceptions. Thus the union of self with the world occurs, not in the form of an artificial construction, but by expanding self-knowledge in a manner consistent with the spirit. Thought and thinker unite more and more and remain experienceable as separate beings. In this unity the thinker expands into the world of perception and finds there another form of the same world.

I found this union expressed in the book 'Philosophie und Anthroposophie' by Rudolf Steiner in several places, both philosophical and anthroposophical. Philosophical: "In this way, knowledge theory can substantiate the thesis 'that even in pure thinking a point can be reached in which reality and subjectivity are completely congruent, where man experiences reality'. Anthroposophically: "If he starts from there and fertilizes his thinking in such a way that this thinking comes out of there, then he understands things from within. There is thus something available in me, conceived and created at the same time by a pure act of thought, through which we penetrate the boundary that must be set for everything else between form and matter".

This is how far I developed pure living thought and found the moral will, the will that as an active thought being leads and follows the inner development.

In addition, this will, this spectator, could also perceive himself and recognize himself as a 'consciousness being', in which the spiritual world lies hidden, since it is in this moral will, beholding it, that it manifests itself.

All this is electrifying, not ripe for revelation. Yet everything known with this 'self-aware consciousness' is always a spiritual reality. From this I draw the certainty of my insights, and also the sharpness of my words - for we no longer have time for eternity...'.